More than enough fault to go around. 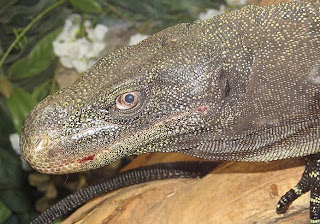 Neglectful parents, infanticidal lizards, probably they all say society is to blame.

BBC - We found the scene of the crime deep in the jungle: a gigantic compost heap with a hole dug in the top.

The mound was built by an incredible chicken-like creature, the scrub fowl... Inside this nest of rotting vegetation they lay their eggs. This also marks the end of their parental care.

Warmth from the decaying matter incubates the eggs until the young birds eventually hatch and instinctively dig themselves out of the mound to fend for themselves in the rainforest.

They never see their parents.

The mound, we discovered, had been dug out from the top and the eggs raided.

We set a camera trap in case the thief returned. Within a week, we had caught our robber on CCTV. It was a dragon-like monitor lizard.

Monitor lizards are the largest predators in the jungles of New Guinea.

Salvadores monitors are the longest lizards on Earth, growing to more than three metres (10ft) in length.

The author thinks the birds are the victims here, but is that any way to raise offspring? It takes a village to have your children eaten by dragons, if you ask me.