Stoned locusts: like just being a plague isn't enough 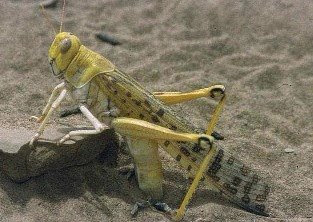 BBC - Desert locusts are known to swarm by the billions, inflicting severe hardship on farmers in parts of Africa, China and other areas.

But the insects actually spend much of their life in a harmless, "solitary" phase.

When food runs short, they slowly become clustered together and enter their "gregarious" phase, culminating in an aggressive swarm.

Prior to swarming, the locusts undergo a series of dramatic physical changes - their body colour darkens and their muscles grow stronger...

(Scientists) triggered the gregarious behaviour by tickling the beasts' hind legs, to simulate the jostling they experience in a crowd.

They found that locusts behaving the most gregariously (in swarm-mode) had approximately three times more serotonin in their systems than their calm, solitary comrades...

"So to find that the same chemical is what causes a normally shy, antisocial insect to gang up in huge groups is amazing."

It's a familiar story. "They were so quiet. Kept to themselves," shocked neighbors say...