Bad boy bees and prevaricating plants probably deserve each other 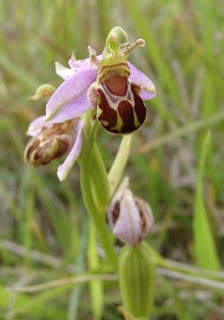 In belated recognition of Darwin's 200th birthday and the 150th anniversary of the publication of Origin of Species, which took place on February 12th, we take a moment to consider some recent research into the pollination of orchids, the subject of some of his important early research.

Some orchids lure bees to pollinate them by tricking them into thinking they're going to get lucky - the flower imitates both the appearance and smell of a female bee.

An additional kink has been revealed in recent research, reported in New Scientist:

Orchid lures bees with the promise of sex with strangers.

Swiss researchers have discovered that the pheronomes used by the orchids actually don't smell exactly like the females in the local population of bees.

"This was not at all what we expected. If the orchids thrive on imitating female bees, the match should be as perfect as possible", says Schiestl.

Unless, of course, the males like their girls just a little bit different...

And indeed, male bees have the hots for exotic perfume. Given the choice between a dummy infused with the pheromone cocktail produced by the girl bee next door and another one with the bouquet of a female from another population, the males visited the scent that was new to them 50% more often.

But orchid scent, with yet greater differences in the pheromone mix, was even more popular. In choice tests it attracted males up to five times as often as that of a local female.

Don't miss the NSFW (if your co-workers are insects) video.

And more than you probably need to know about Pollination through Pseudo-Copulation in Orchids here.

(Photo, of a different species of bee orchid, by Wikipedia user Ramin Nasika.)