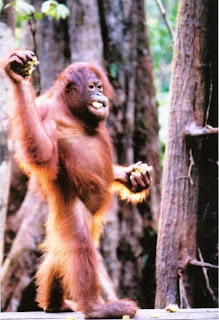 If you happen to forget a screwdriver in the gorilla cage, the animals will hesitantly approach it, briefly sniff it, and subsequently ignore it.

Leave it in a chimp cage, and it will be used in vigorous display, thrown about, and forgotten.

But if you leave it in the orangutan cage, one of the animals will unobtrusively pick it up, hide it, and use it to let itself out when you’ve left for the day.

If you've ever doubted that apes have minds like ours, especially the much more alien-looking orangutan, check out this story. Here's an animal that not only can figure out how to use the wrong tool for the job, but can have second thoughts about it once it's done. I don't know what could be more human.

Employing a level of cunning that could have come from a prison movie, the brownish-orange primate stretched the shirt, scaled a 10 1/2-foot wall to the top of the moat, wrapped the shirt around the "hot" electrical wires surrounding the exhibit and swung out about 12:45 p.m., zoo spokeswoman Sarah Burnette said.

Berani means "brave" in Bornean, Burnette said, but on Friday afternoon, it could have meant "reluctant."

"He seemed like he wanted to get back into the exhibit," Burnette said. "That's the way it is in zoos. . . . He jumped over the enclosure and jumped back in."

Berani, who didn't harm anyone, used a T-shirt that had been tossed into the enclosure as a toy for the 150-pound adolescent male and two female orangs, Blaze and Feliz....

Berani was "very congenial, not threatening," she said. "He wanted to explore a little bit and figured it was time to get back home because his zookeeper was yelling at him."

...The zoo also likely will adjust the mix of primate playthings.

"We gave them T-shirts every day," Burnette said. "Not anymore."

Read the whole article by John Pope at the New Orleans Times-Picayune.

Photo from Wikipedia by Tom Low