This blog doesn't usually take the side of the animal, but I can't help making an exception for this one. 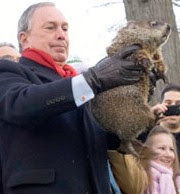 "He got my finger pretty good," Bloomberg allowed, as he held the recalcitrant groundhog up in the air and declared spring on the way.

The Groundhog Day mayor-nipping came just three days after Bloomberg chomped 15% out of the zoo's budget, reducing it to $1.3 million from $1.6 million.