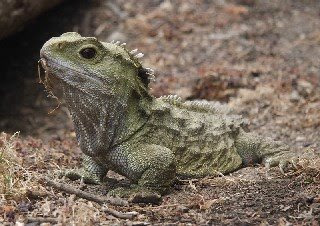 NEW ZEALAND, BBC - The keepers of Henry, a tuatara, had thought he was past his prime - especially after showing no interest in females during 40 years in captivity.

But he mated with 80-year-old Mildred last July and 11 of the eggs she produced have now hatched.

Henry's keepers have put his newfound vigour down to a recent operation to remove a tumour from his bottom.

Henry arrived at Southland Museum in the South Island city of Invercargill in 1970 and, his keepers say, soon became overweight and idle.

He was known for his foul temper and had a tendency to attack other tuatara - forcing the museum to keep him in solitary confinement for many years.

But since his operation, Museum tuatara curator Lindsay Hazley said he had had a "major personality transplant".

"I have done lots of eggs before but these are just special because they are Henry's," Mr Hazley told the Southland Times.

Museum curator Lindsay Hazley told AFP news agency: "He bit the tail off his previous female companion twice. But since the operation his hormones have been raging... He's definitely up for it, he's become a real Jack the Lad since he lost his virginity," he said.

Email ThisBlogThis!Share to TwitterShare to FacebookShare to Pinterest
Labels: reptiles