The man and woman on the street at The Onion, always ready with an opinion, comment on serotonin-crazed locusts. 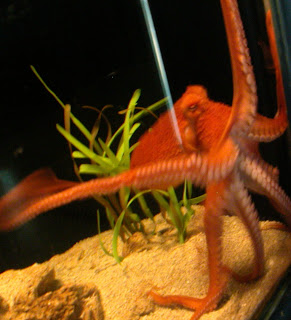 And like his previously reported aquarium-damaging relative, an octopus in Santa Monica figures out how to cause a flood:

AP - Staff at the Santa Monica Pier Aquarium in California say the trickster who flooded their offices with sea water was armed. Eight-armed, to be exact... The octopus apparently tugged on a valve and that allowed hundreds of gallons of water to overflow its tank.

Aquarium spokeswoman Randi Parent says no sea life was harmed by the flood, but the brand new, ecologically designed floors might be damaged by the water.

Since octopuses are considered by many to be the most intelligent invertebrate -- and to have good memories -- (aquarium education specialist) Fash said he jury-rigged his octopus tank piping with clamps and tape in hopes of thwarting any further mischief by its occupant. "She would need tools," he said of his octopus, which until now had no name.

"Some people are suggesting we call her 'Flo,' " he said.