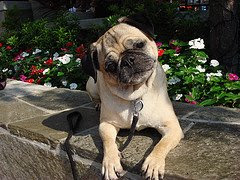 Don't trust that innocent "Who, me?" face.


According to a recently released report by the Centers for Disease Control, you'd better pay attention to keeping your feet on the ground around your pets, 'cause they're out to get you.

As reported by ScientificAmerican.com:

America's dogs and cats, it turns out, can be blamed for injuries caused in an estimated 86,000 falls treated each year in the country's emergency rooms, federal health officials said today.

Dogs are more of a hazard - 88% of the injuries were dog-related. I'm confident that the explanation for this lies in the fact that dogs deliberately try to trip people who are carrying something edible. It's a fascinating example of the evolution of food-gathering behavior that deserves further study.

Unfortunately, the CDC's meticulous research won't contribute to that topic, because it was apparently stymied by the large percentage of us who found our dog-tripping episode too embarrassing to explain:

Among the people hurt while walking their dog, a third of the injuries came from tripping over the pooch and a fifth from the canine pushing or pulling them. Nearly 9 percent of injuries occurred when someone toppled over their pet's toy or food bowl. Investigators weren’t able to sort out the circumstances of nearly 40 percent of doggie-related falls. 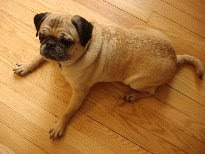 (Pug Rose, looking for someone to trip.)