The dog ate my homework: it's an excuse that's as old as homework. Grownups can use it too, though: here's your precedent.

Perhaps one of the most famous and influential bad animals in American literature, Toby, a setter, destroyed the first manuscript of John Steinbeck's Of Mice and Men.

Steinbeck had nothing but excuses for this behavior; William Kennedy explains: 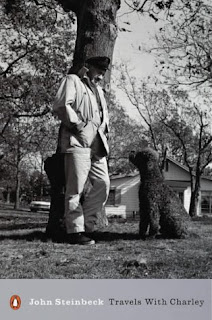 In 1933 John Steinbeck was so poor he couldn't afford a dog. The literary critic Lewis Gannett uncovered this fact in Steinbeck’s correspondence with his agents during the time he was writing Tortilla Flat... “I need a dog pretty badly,” Steinbeck wrote. “Apparently we are headed for the rocks. The light company is going to turn off the power in a few days . . .”

By the time he was writing (Of Mice and Men) he had earned enough money to buy a dog—a setter named Toby who, one night, alone with the Of Mice and Men manuscript, made confetti of it. “Two months’ work to do over,” Steinbeck wrote. “There was no other draft. I was pretty mad, but the poor little fellow may have been acting critically. I didn't want to ruin a good dog for a manuscript I'm not sure is good at all.” Mice, as Steinbeck called it, was critically acclaimed, became a Book-of-the-Month, and a serious movie, but the suddenly famous Steinbeck still had his doubts. “I'm not sure,” he wrote, that “Toby didn't know what he was doing when he ate the first draft. I have promoted Toby-dog to be lieutenant-colonel in charge of literature.”

The excuses are no surprise from Steinbeck, clearly a lifelong sucker for dogs. Not only did he count his lack of a dog as an equal hardship to his imminent lack of electricity, he is of course famous for writing an entire book about traveling cross-country with his standard poodle, Charley - who is introduced as follows:

Charley is a born diplomat. He prefers negotiation to fighting, and properly so, since he is very bad at fighting. Only once in his ten years has he been in trouble - when he met a dog who refused to negotiate. Charley lost a piece of his right ear that time.