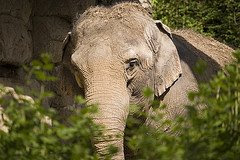 Drink isn't the only thing that prompts bad behavior in elephants. It's not uncommon for hungry elephants to damage food crops, like many other animals. But some elephants repay human kindness by committing crimes: in Thailand, denied their usual handout of food from truck drivers, they stopped them on the road and robbed them at trunk-point:

Yoo said the elephants had learned to pick up sugarcane dropped by drivers who took pity on them, but that the practice had taught them dangerous new habits.

He told the daily of incidents where the leader of the herd had stood in the road to block the vehicle while the others unloaded the produce with their trunks.