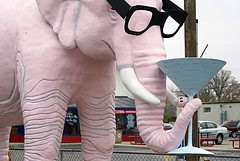 The incident reported last week is only the tip of the rampaging elephant iceberg.

Drunkenness is repeatedly reported as a cause of elephants behaving badly in Sri Lanka and and in India, where they steal fermenting rice beer,these drunken brawls can be fatal to humans. But, like most drunks, they're a danger to themselves as well,like the ones that electrocuted themselves messing with power lines.

However, apparently it's a myth that elephants in Africa get drunk from fermented fruit, in large part because they and their fellow animals are too greedy to let fruit lie around long enough to rot.