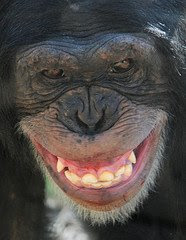 Santino had a habit of throwing stones at zoo visitors(and from personal experience I can say, any zookeeper can sympathize). That's not unusual - primates are well known to throw even less savory objects at passing humans. What's significant is that he gathered ammunition when no one was watching and hid caches of it around his exhibit. Another indication that he knew exactly what he was doing: when the zoo was closed to visitors over the winter, he didn't bother to gather and hide rocks.

Well, as anyone knows who's observed humans, intelligence isn't all it's cracked up to be. But the humans, having exhausted all their other options to keep zoo visitors safe, had the last laugh in this case:

"They have castrated the poor guy. They hope that his hormone levels will decrease and that will make him less prone to throw stones. He's already getting fatter and he likes to play much more now than before. Being agitated isn't good for him," said (researcher) Osvath.