There's a double standard in everything... 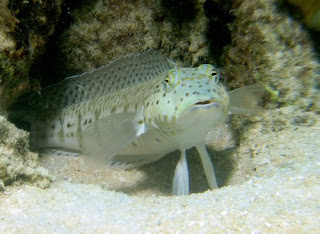 Eating one's offspring seems to be actually rather common in the animal kingdom.
There must be a reason for this behavior, or it wouldn't have evolved. But it's an interesting mystery because if the point of reproducing is to pass on your genes, it seems just a bit counterproductive.

A couple of recent studies of this phenomenon show that even in the animal kingdom, when it comes to child care, men don't have to work nearly as hard to be considered great for pitching in with the child care.

One study looked at sand gobies, a species of fish where dad provides all the care. Sounds enlightened, right? Not so fast:

"Overall, dad does a pretty good job of taking care of the eggs, except for one thing — he tends to eat about a third of them," said researcher Hope Klug, an evolutionary biologist at the University of Helsinki in Finland. "Based on previous work in this species, we know that the males aren't just doing this because they're hungry — even when they have excess food, they continue to eat a really large number of their own eggs."

There are many theories about offspring cannibalism that aren't too bad - for example, getting rid of defective or inferior young - but in this case, researchers concluded that the males's goal is to get back to partying:

The scientists found the males preferred to eat larger eggs — which take longer to hatch — from the second female they spawned with. They conjecture the fish do so to cut down on the amount of time spent caring for their young, thereby enabling the dads to reenter the mating game sooner.

Sand goby dads have to care for thousands of eggs "until they hatch — about one to two weeks — and during this time he isn't able to attract any new females," Klug explained.

In contrast, another study showed that rattlesnake mothers eat their babies because they're exhausted and starving after giving birth - and they only consume the ones that are already dead.

Isn't it always the way?