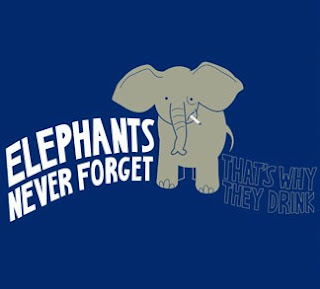 But what are the drunken elephants drinking to forget?

One study suggests that some rampaging elephants are actually taking revenge on humans. But it makes an even more interesting point: Like people, they've become hooligans because of the breakdown of the family, resulting from poaching in the 1970s-80s:

Many herds lost their matriarch and had to make do with inexperienced "teenage mothers". Combined with a lack of older bulls, this appears to have created a generation of "teenage delinquent" elephants...
A study...showed that a lack of older bulls to lead by example had created gangs of aggressive young males with a penchant for violence towards each other and other species.

T-shirt from Cat and Girl, buy it here.