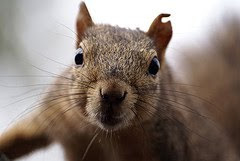 We've come a long way since the days when people would purposely introduce species to a new country. The havoc wrought by the cane toad has taught us a lesson, as well as the effects of accidental tourists like the brown tree snake.

Efforts to eradicate invaders are costly and not often successful, and the Times reports that scientists in England have suggested that in some cases, we just give up: some species are so established that they should be granted "ecological citizenship."

It's clear that these scientists have no problem with rewarding bad behavior with the privileges of citizenship:

The grey squirrel would probably be among the candidates for such a reassessment.

Introduced to Britain in 1828, it has spread across most of the country, driving out the smaller red squirrel and possibly damaging wild bird populations by eating their eggs.

They note that some species have already benefited from a sort of de facto policy of this sort:

Some invaders are already ecological citizens. One such is the brown hare, which was introduced to Britain by the Romans but which is so widely accepted that its recent decline has prompted government to list it as an endangered species.

Similarly, rabbits, brought to Britain in the 11th century and now responsible for £115m of losses to farmers each year, are also seen as British.

Finally, they even call for politically correct language to describe the invaders:

They suggest that researchers should instead use such neutral terms as “non-native”.

I leave it for you to decide: Is this any way to teach bad animals a lesson?