Monkeys above their station 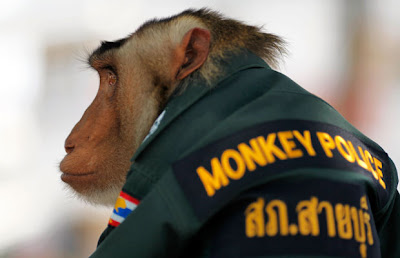 Might as well make it an all-primate week, since there's never a shortage of monkey trouble:

-in New Delhi, a bus driver who was letting his pet monkey ride on his shoulder rammed his vehicle into a house, injuring three.

Police said Prabhakaran and his “friend” were sharing a particularly affectionate moment when things went awry: the animal was picking lice from the 22-year-old’s hair, possibly lulling him into a lazy trance, when he lost control.

According to the passengers, the monkey had been a nuisance even when was not playing around with Prabhakaran, a disturbance throughout the journey as it scampered from part of the bus to another.

Prabhakaran confessed to having brought the three-month-old monkey — police officers don’t know yet if the animal answered to a name — from his village as he didn’t want to leave his “friend” back home while he was at work.

The driver narrowly escaped a crowd that police described as "baying for his blood," lost his job, and may go to jail. But - of course - no word on punishment for the monkey, who seems equally to blame.

This bus driver is far from the only one these days who doesn't understand that monkeys need to be kept in their place. In Thailand, a macaque (pictured above)has joined the police force, on the theory that this is going to improve troubled relations with Muslim separatists.

But don't think it's just in Asia where monkeys are being treated in ways that are likely to go to their heads. In the US, your service monkey will probably have a pleasanter experience in the airport than you will: new TSA regulations make sure that monkeys may not be manhandled by screeners.