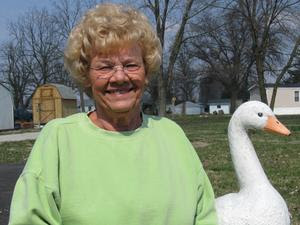 It's the time of year when an animal's fancy turns to thoughts of perpetuating the species, but as we've seen here many times before, some of them are doing it wrong.

Usually this inconveniences no one but the animals themselves. We've seen more than one case where a male mates a female to death, not exactly an effective way to pass on one's genes, as well as a duck mating with a dead duck of the same sex. Even the ones who have sex with a different species usually only bother other animals, although not always.

But this sort of thing gets out of hand when an innocent bystander is held hostage to animal perversion: In Witt, Illinois, a woman was trapped in her house for several hours when a goose tried to mate with her concrete lawn ornament (pictured above).

Every time Joanne Martin tried to open her front door, the lust-crazed gander attacked her. Eventually six men were trying to assist, without success.

“Brent Bourke beat the heck out of him with a stick,” says Joanne, “and ran him out on Highway 16. My house is on 16. He was going pretty good, but then the goose turned around and came back at him. That was the funniest part.”

Brent, with the stick-defying goose at his heels, beat a hasty retreat and ended up back in the house with the rest of them. The goose was still king of the yard.

But that stick thing had worked as well as anything, so Bill Harris, another would-be rescuer, took a stick and whacked at the goose. Bill was soon back in the house as well.

The goose was undeterred from its mating frenzy when firecrackers were thrown at it, as well. Finally, in a concerted effort, a couple of the men held the goose at bay long enough for the others to grab the statue and close it in a shed. With the object of his passion now inaccessible, the frustrated goose eventually wandered off.

The story was over... or was it? A reporter visiting a few weeks later made an ominous observation:

The day I visited Joanne, I hauled her concrete goose out of the shed just long enough to get a picture, then I put it back. It’s a nice-looking concrete goose, sure, but nothing to get all that excited about.

As I pulled away, the goose safely back in the shed, I noticed it wasn’t Joanne’s only lawn ornament. She has two concrete deer.

Read the whole story by Dave Bakke at the State Journal-Register. I'm serious, go read it, and read all the way to the author's contact info at the end which includes this wise observation:

Everybody has a story. The problem is that some of them are boring.