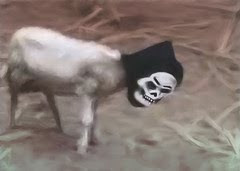 The deluge of bad animal news continues, along with the usual humans who don't know what side they are on:

In Australia, a rampaging goat put three people in the hospital when it invaded the grounds of a nursing home:

The goat butted the gardener before attacking a second man, aged in his seventies, who rushed over to help. Both of the men suffered suspected spinal injuries during the incident and the gardener, aged 60, was also left with cuts to his head and elbow.

A woman who had witnessed the furore injured her ankle as she ran for help.

Of course, some made excuses:

Peter Balassone, who lives next door to the goat's owners, said he was surprised to hear of the drama.

"The goats have been fine, believe it or not. Not a problem at all," he told the Melbourne Herald Sun newspaper.

Then this neighbor reveals what might be the reason why there have not been problems before: it's not the goats' good nature, it's technology:

"But he does have an electrified fence on his side (of our fence)."

Also in Australia, a water aerobics class had to be delayed when a freshwater crocodile was found in the pool.

And finally, in Florida, where that monkey is still on the loose, people not only have to be warned not to feed it, some have actually threatened the trapper who's trying to catch it:

"I've had two different phone calls so far (from people) telling me if I kill the monkey that they're going to kill me," Vernon Yates of Wildlife Rescue and Rehab told 10Connects.com.