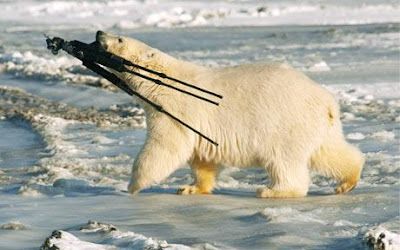 We can hardly keep up with the deluge of bad animal news lately:

In Alaska, a polar bear sick of being put on a pedestal by nature enthusiasts let three photographers off with just a warning by stealing their tripod. It's not clear that they got the message, as the man who took the picture above seemed to find the whole thing amusing:

"It was a great surprise when one bear picked up the tripod. When he walked off with it we couldn't stop laughing and joking as he had selected the most expensive."

In Nepal, hundreds of students waiting for the results of exams told that their papers, allegedly safely under lock and key at the police station, had been eaten by rats.

And in England, mail delivery has been halted to a woman in Leeds because delivery workers have been repeatedly attacked by her cat. The cat is apparently not only vicious but also deceptive: He's putting on such a good act the rest of the time, that its owner is convinced that the attack stories are impossible:

She said: "Tiger is 19 years old, he dribbles when he sleeps and snores - he sleeps for 20 hours a day... If Tiger climbs up a tree he is done in for the rest of the week. I find it really hard to believe."