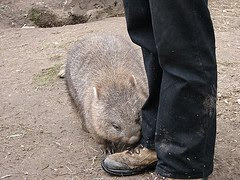 I present this article from The Telegraph in its entirety without comment except to say that I had nothing to do with it.

Bruce Kringle, 60, was stepping out of his caravan in the rural town of Flowerdale, when he felt something attack his leg.

In an assault that lasted 20 minutes, the wombat brought him to the ground before climbing onto Mr Kringle's chest to continue the attack.

Luckily, Mr Kringle was able to reach for a nearby axe and kill the animal.

Mr Kringle, who survived the Black Saturday bush fires in 2009 and is in the process of rebuilding his home, was treated at the scene by paramedics and transferred to hospital where last night he was in a stable condition.

Paramedics said he had suffered puncture wounds to his arms and legs.

Wombat experts have described the attack as "highly unusual".

On the list of Australia's most dangerous animals, the wombat does not feature highly.

The furry marsupials, which resemble badgers, are known for their cute and cuddly looks, and are considered one of the more docile native creatures in the country.

Geoff McLure, a spokesman from the Department of Sustainability and the Environment, said the wombat was probably suffering from mange, which could make it irritable and violent.

"It probably saw the man as a threat and rushed at him," Mr McLure said.

"If it had mange, it would have been suffering a great deal and would be very intolerant to human interference."

While wombats might look benign, they are strong, he warned.

"They can be quite big, and can move quickly," he said.

"But it's not known that they will push the attack to where they would physically attack someone."

Photo of wombat preparing to attack a shoe at a Tasmanian wildlife sanctuary by Flickr user mdavidford. The individual pictured is a trained professional wombat handler. Do not try this at home.