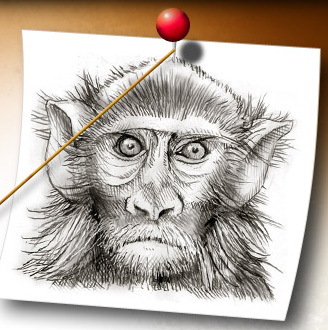 This is how they thank us: Last week, we reported on a man who was savaged by his service monkey. After describing an attack that he said was worse than his experience in the Vietnam War, his conclusion was still "He's a great monkey."

Guess how he was rewarded for his forgiving nature?

A Chesapeake man bitten by his monkey for the second time in two weeks is out of surgery.

"The monkey just attacked him," he said.

Noah, a certified service animal who comforts his owner’s post-traumatic stress, tore into Hamric’s hamstrings and bit his left hand, biting off his pinky.

Hamric wrestled the monkey to the ground and knocked him unconscious before getting him back into his cage, Bill Hamric said.

After he fed him pork chops, even. The local news station that reported on the incident also discovered that the last bite had not been the first offense of this "great monkey." Police had visited the home twice before on reports of bites to other people.

They also report that finally someone has seen the light:

Now, he’s ready to either "put Noah down or give him away," Bill Hamric said.

In other monkey news updates, the Florida roving monkey that we reported on previously now has his own Twitter account. You can also check out all the coverage from the St. Petersburg times in one place, with fancy graphics (like the monkey mug shot above).