Why do we allow these creatures in the house? 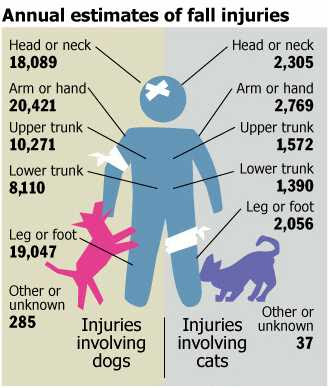 It's old news, but it bears repeating. We reported over a year ago that over 86,000 emergency room visits per year are caused by people's pets.

A new paper in the Journal of Safety Research gives some of the details behind that number, such as

-Dogs were almost 7.5 times as like to cause injuries as cats
-Women were twice as likely to be victims than men
-Watch where you're going: A third of dog-walking injuries happened when the person tripped over the dog
-Wait for them to come to you: 12 percent of cat-related injuries happened when chasing the cat around the house

Regular readers of this blog will not be surprised to find that there are still people who blame anyone but the animals. Scientific American talked to a woman who broke her ankle chasing her puppy around the dining room and spent seven weeks in a cast. Now walking with a cane and undergoing physical therapy, she says:

"I can't blame the dog. I can only blame myself and the slippery floors... I was angry at myself for trying to keep pace with a 10-month-old puppy as a 44-year-old woman."


Graphic from LiveScience.com - see the whole thing and find out the most risky pet-related activities, here.