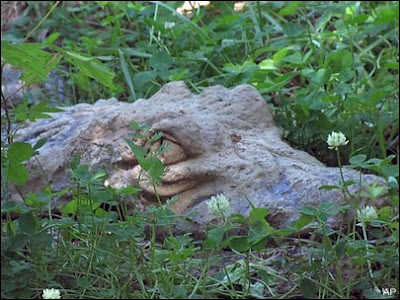 Last week we saw a major police response to a stuffed tiger in England, and perhaps you thought this was a unique event. Hardly, as any animal control officer will tell you. They are constantly called to respond to "emergencies" involving snakes that turn out to be garden hoses, dying animals that are really plastic bags, and, like the fuzzy feline in the English case, animals that turn out to be stuffed, plastic, or statues.

In fact, this past week it happened again,this time in the US. A resident of a Kansas City suburb called police to report a sighting of an alligator. Lacking a helicopter with heat-sensing equipment, this time responding officers actually shot the critter twice before realizing something was up.

You may think this is all good for a laugh, but don't forget it's your tax dollars at work. And in fact, in Great Britain, one watchdog organization has totalled up the cost of responses to such calls - most of which turn out to involve real animals - and the figure is sobering: 3.5 million pounds in the last three years for rescues involving 2,400 cats, 2,180 dogs, 1,700 horses, 2,090 birds (including 1,244 seagulls, 159 pigeons, 57 swans and 12 parrots), 26 foxes, 19 squirrels, seven ferrets, seven badgers, ten hamsters, 15 snakes, 11 fish and seven dolphins. One fire brigade in Wales even rescued a snail whose plight was distressing an elderly lady.

You may think seagulls and snails should be left to fend for themselves, but because your foolish fellow citizens don't, safety personnel have no choice but to devote their resources to these rescues, as one official explained:

"If we don't rescue that animal somebody else will or will try to. I've seen people have their arms trapped in drains trying to rescue ducklings and we've actually had to dig the road up to get the person out."

Email ThisBlogThis!Share to TwitterShare to FacebookShare to Pinterest
Labels: alligator