Bad animals down on the farm 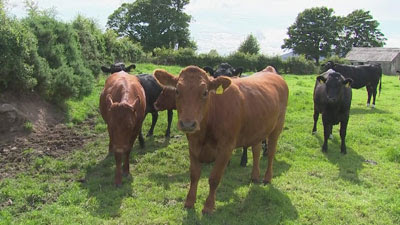 Adding to last week's sheep on a roof, it's an epidemic of farm animal misbehavior:

-In England, a lamb interferes with the economy by lying down on the tracks of a steam train that's been successful at attracting tourists to the area. The conductors interrupted their journey with an emergency stop to rescue the "tired and dishevelled looking animal."

-Male pigs are proven by science to be, well, pigs: They're more attracted to sows who've got artificial breast implants.

-Rodents don't only pick on someone their own size down under: In South Australia a plague of mice were trying to eat a farmer's pigs alive. He's resorted to coating the swine in engine oil to make them taste bad.

-Finally, in Ireland, a farmer kept locking his cows inside each night only to find them wandering the next morning. Assuming cattle thieves were responsible, he set up a video camera, only to discover that the cows themselves were to blame: One, called Daisy, had figured out how to unlatch the gate. Watch the video proof:


Photo of the cow co-conspirators on the run from Sky News.