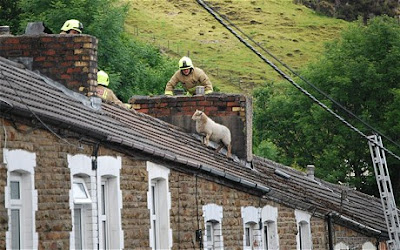 Animals continue to prove that nothing reported on this blog is an isolated incident:

- In our last post we saw crows attacking a police station in Washington State; is it really more than coincidence that bald eagles are doing the same at a post office in Alaska? Because eagles are a protected species, Reuters reports:

There is not much that residents can do about overly bold bald eagles other than to post warning signs, take steps to avoid the fierce birds and wear hats.

- Despite that report on the high cost to British taxpayers of rescuing animals that have gotten themselves into ridiculous positions, a Welsh fire brigade responded to a call to get a sheep down off a roof. A "spokesman," presumably not one of the people who actually had to risk life and limb, downplayed the seriousness of the situation:

"It was certainly an interesting call-out, it's not where you'd expect to find a sheep, really quite funny. It brightened up our weekend, that's for sure."

- And finally, for those of you who are still tempted to rationalize all this bad animal behavior, from another story on Dusty the cat burglar of San Mateo:

"We always try to find meaning in what animals do. But maybe he just does this because it's fun."