Bad dogs on the farm 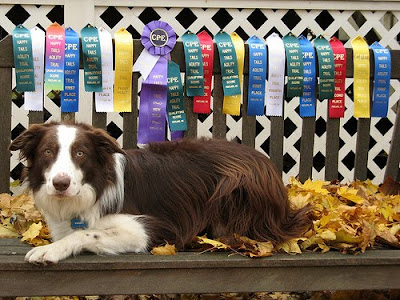 Dog people who own other breeds can get rather fed up with border collies. We don't care that they're best at herding sheep, because really, who wants to herd a bunch of stupid sheep? But these dogs refuse to stop there. They also dominate dog sports like agility to such an unfair extent that in some places, clubs have had to put them in their own class or no one else would get to compete.

Even more annoyingly, they are sometimes cited as the most intelligent breed. In some cases, this is based in part on a willingness to do whatever someone else tells them, which may not be a standard for smarts that everyone agrees on. But there's also a border collie who holds the record for understanding the most English words, responding correctly to the names of over a thousand toys. And yet no one seems to observe that this must also be the record for the most spoiled dog ever, with that number of toys.

And still not satisfied with those accomplishments, these overachievers are compelled to go for even stupid awards like the Guinness record for fastest car window opening by a dog.

So we couldn't be more pleased to note these two stories:

- A Border collie in Somerset, England, can't do his job because he's afraid of sheep. His owner says that Ci "instinctively wants to work the sheep, but is too scared."

"If they run away from him, he will go after them and act like a proper sheepdog, but the moment they turn and face him he runs away.

"Sheep can be quite aggressive if they think they have the upper hand – they stamp their feet and gang up in numbers and act like an army.

"The only way to make it work is for me to get behind them first and shoo them so they run away and then Ci joins in. It just means a lot more work for us to do," she added.

-And at the same time, The Telegraph reports on a sheep-herding dog who puts Ci the border collie to shame: Nancy the chihuahua. Check out the link to see video of the two-and-a-half pound rescue pup showing those sheep who's boss.


Border collie with no modesty about his accomplishments by Flickr user WoofBC.

Email ThisBlogThis!Share to TwitterShare to FacebookShare to Pinterest
Labels: dog