Animals vs Law Enforcement: on the attack 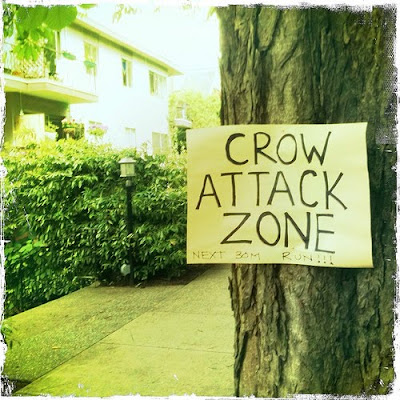 Everett, Washington sounds like a nice small city, not the kind of place where the police are constantly confronted by abuse and harrassment from the citizenry. The human citizenry, anyway. But now they've got another species to worry about, as reported by the Everett Herald:

A few days ago, the crows decided they didn't like the cops. They started swooping down on them and dive-bombing them as the officers walked from their cars into the station.

Everett police Lt. Bob Johns recently was flanked by them and "got zinged," he said.

The crows don't care much for rank, either -- they've gone for top brass and detectives in particular, police Sgt. Robert Goetz said.

A wildlife expert's advice was to use umbrellas for protection. This may seem like a rather lame defense, but there's a risk to retaliating against these intelligent birds, as they've already demonstrated:

At least one officer has tried using his siren to scare the crows away: They responded by decorating his car with droppings.

And in fact, when you go after crows, you're at risk of very personal revenge. A study published last year showed that crows can recognize and remember the faces of individual humans who've threatened them - and they don't keep it to themselves.

To test specific recognition of faces rather than gait, clothing or other characteristics, researchers wore a realistic mask when trapping and banding crows, an experience that the birds - to put it mildly - don't care for. Then, volunteers visited the trapping sites, some wearing that mask and some wearing other control masks the birds had not seen before. The crows' reactions clearly distinguised the different faces.

“The birds were really raucous, screaming persistently,” said one volunteer who wore the trapper's mask, “and it was clear they weren’t upset about something in general. They were upset with me.”

The crows had long memories - three years later they still remembered and reacted strongly to their enemy. And they taught their neighbors and even their children about him: crows too young to have been born at the time of the trapping knew who the bad guy was.

"Crows hold a grudge, and they are big gossips," says professor David Craig. "They spread the information around. If you're bad to one crow, many more may hear about it."