Dog finally put in her place 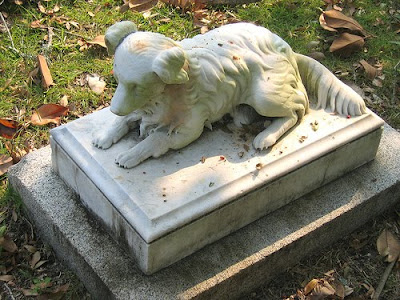 More and more, animals are getting swelled heads about their place in the world. We've seen them getting influential jobs and political appointments and even one that caused a scandal by receiving communion at a church in Canada.

Today we note the passing of one of these animals: a maltese named Trouble. When millionaire Leona Helmsley died in 2007, she left $12 million for the purpose of keeping this dog in the luxury she was accustomed to.

A judge later reduced the amount to two million, but it was still plenty to allow Trouble to retire in style at one of Helmsley's Florida hotels. The dog's caretaker conceded that he could get by on $100,000 a year: $8,000 for grooming, $1,200 for food and the rest for his fee and a full-time bodyguard, made necessary because Trouble allegedly was the target of death and kidnapping threats.

Trouble was apparently treated better than Helmsley's human family. According to the New York Daily News:

Trouble accompanied Helmsley via private jet to her homes in Arizona and Florida, her 21-room Connecticut mansion Dunnellen Hall, and Helmsley's duplex penthouse with swimming pool at the Park Lane Hotel on Central Park South.

Helmsley, who cut two grandchildren out of her will and evicted her son's widow after his death, was often seen cuddling the canine, which was always impeccably dressed.

But even a dog who outlives her owner and out-inherits the human relatives must eventually meet the fate that awaits us all: It was belatedly reported last week that Trouble died in December.

And Trouble is being kept in her place, finally, at the end. Helmsley wanted the dog buried with her. But a spokesman for the cemetery where she was laid to rest has the last word: "You cannot bury pets in a cemetery."