No kind of animal is safe 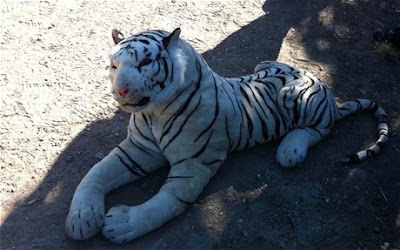 As a reader of this blog, you presumably know better than to let your children have pets. But you probably think there's no harm in letting them indulge in a few furry stuffed toys.

You'd be wrong. Not only do stuffed animals encourage the unrealistically positive view of animals that we strive to stamp out here. But they can cause major problems of their own, as police in Hampshire, England discovered last week, when a citizen called to report a white tiger loose in a local field.

Officials responded in force, appropriately for such a dangerous animal, with a police helicopter and trained staff from the local Marwell Zoo, and evacuated a nearby golf course. The animal was fairly immobile, but that did not initially raise their suspicions. And you can't blame them, given how lazy most cats are, especially in the middle of the day. In fact we've noted before that tigers sleep nearly sixteen hours per day.

But then the helicopter's thermal imaging equipment detected no body heat and the animal didn't react to being buffeted by the winds generated by the helicopter. Finally, the downdraft caused the creature to roll over, revealing that it was a large stuffed toy.

Watch live footage of the culprit and a video interview with the chief inspector of the local police at The Telegraph. He seems like the kind of level headed guy you could trust to respond to a real animal emergency, and now he's had a practice drill. If I was a real tiger, I'd take my troublemaking elsewhere.