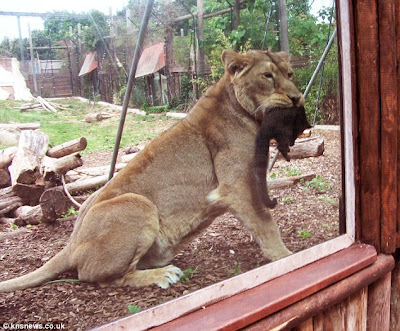 Some people still cling to the illusion that animals are less violent than humans, that they only kill because they need to eat.

It's hard to use this excuse for the snow leopard in Pakistan who recently killed 68 goats in a single night, far more than it could consume. Not only is this animal wasteful at best, it clearly doesn't know which side its goat is buttered on, because now the slaughter is causing disputes between the farmers that own the goats and conservationists. That is, conservationists who want to protect the snow leopard. Way to help the people who are trying to save your furry butt, huh?

There are also plenty of animals that kill other animals that they don't eat even a little bit of. We've seen before that dolphins, hiding behind their inexplicably charming reputations, kill both the young of harbor porpoises, and baby dolphins as well. A recent study suggests that the culprits are young males taking out their sexual frustration. Even the researcher, presumably well acquainted with the truth about dolphins, was appalled by their behavior:

In one particularly violent attack, three dolphins corralled their victim before seven others joined them to ram the porpoise to death. Cotter found most shocking the fact that two dolphins remained behind to play with the carcass before pushing it towards his boat. "It was almost like they said: 'We're done playing with it, here you go'."

But we can be thankful that there are at least a few children who won't grow up with illusions about the peaceful nature of our fellow creatures, thanks to one lion at a zoo in England:

The cute binturong - also called a bearcat - was one of a pair to climb a tree before dropping into the big cat den at Chessington World of Adventure.

Jason Harcombe, visiting with his two-year-old son Oscar, said: "The poor animal didn't stand a chance. The lions jumped on it straight away and killed it.

"The lioness brought the body up to the glass and then she and her mate just ripped it apart in front of us."

Now there's an animal who is really trying to help me do my job here on this blog.


Lion caught in the act in photo from the Daily Mail.