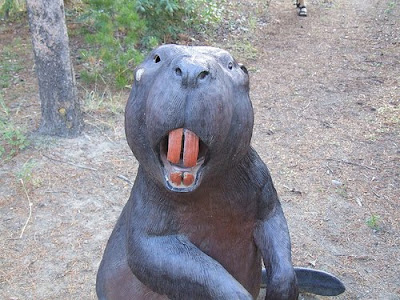 Readers of this blog know that none of us are safe from animals. But some incidents surprise even the experts. In a case called "truly bizarre," three people are being treated for rabies after being bitten in a Philadelphia park - by a beaver.

"Our furbearer biologist, when he heard about this, he was just literally blown away," said one official. (We assume that this is the biologist that studies other furbearing mammals, not that he is fur-bearing himself.)

You probably know to be cautious of wild raccoons, which are the most commonly reported rabid animal in the state, followed by skunks, cats, bats and foxes. But especially if you are a city-dweller, you've probably never given a thought to being afraid of beavers. And with fairly good reason - till now:

"Beavers have never been known to transmit rabies to anything, including other beavers," a game department spokesman told LiveScience. "It's unusual that it was beavers, it was unusual that there were two incidences so closely together and it was truly bizarre it was in Philadelphia."

These two incidents follow on another case in the suburbs in April where someone was bitten in the leg by a rabid beaver. And we can't reassure ourselves that maybe it was the same animal - that one was killed in the incident. So there's not just one.

Officials have recommended that people "avoid the Pennypack Creek waterfront area between Bustleton Avenue and Roosevelt Boulevard in northeast Philadelphia." Seems a bit specific to me. Philadelphia has plenty of nice museums and other indoor attractions to take advantage of. Why take chances?


Statue of five foot tall extinct beaver photographed by Flickr user Travis S. I guess we can be thankful at least they're not that big anymore.

Email ThisBlogThis!Share to TwitterShare to FacebookShare to Pinterest
Labels: beaver