Bad primates from the archives 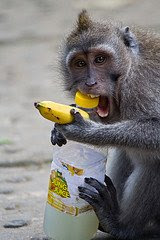 India isn't the only place that has trouble with macaques that don't know where to draw the line. They're also up to the usual primate pranks in Singapore, as Reuters reported in 2007:

Gangs of long-tailed macaque monkeys have been causing havoc in housing estates bordering nature reserves; stealing food and brawling on the streets.

"They roam the estate in groups of up to 20 …- rampaging the estate and turning over dustbins," one irate local wrote to the national paper in October.

"They enter the house, open cupboards, steal food and soil the premises".

Picnics are spoiled and snacks are snatched from bags while golfers tee off. Even the British Club has armed staff with brooms to shoo monkeys away from the gourmet buffet.

As usual when the relatives are involved, some are quick to make excuses.

"It's not that they want to attack. They just think, if you have the food, why don't you share it? Why are you eating and not sharing? Can I have some? They cross the line".

Feeding monkeys has been banned, since it just encourages them. But despite fines of over a hundred dollars, some humans have no more self-control - or fear of the consequences - than their monkey cousins.

Whenever he gets time, 50-year old driver J.J. Jolibi buys ten dollars worth of bananas and heads for the roads by the reservoirs to feed and watch curb-crawling troops.

The self-described animal-lover has been warned twice, but isn't scared of fines:

"A fine is not very expensive," Jolibi said. "I'd feed them again. Maybe the judge will be an animal lover and give me a warning. If the judge hates monkeys, maybe he'll fine me".

Consultant Barbara Martelli, 42, who works with Chan, says stamping out feeding won't be easy, even among Singaporeans well used to a regular diet of government-sponsored education campaigns on everything from flushing toilets to speaking good Mandarin.

"It is good fun. You can't deny that it's good fun. Monkeys are sweet and funny," said Martelli.