Depends on your point of view 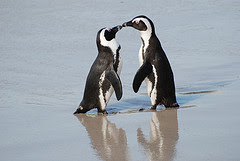 Some consider gay marriage to be a form of bad behavior. But in China, a pair of male penguins changed people's minds.

THE SUN, UK: They were once given the cold shoulder at the wildlife park in China for stealing heterosexual couples' eggs to nest as their own.

But after being allowed to try out with eggs rejected by their mothers the couple have become the zoo's best penguin parents.

Now keepers at Polarland Zoo in Harbin, north east China, have rewarded their devotion with a wedding day.

One wore a tie and the other was dressed in a red blouse – a traditional Chinese bridal colour – as they stepped into their icy wedding room to the music of the Wedding March.

A similar pair in New York's Central Park Zoo had a children's book written about them - but, sadly, in most of this country a wedding would be out of the question, even for animals that are already appropriately attired for the ceremony.