Continuing news from the Making Excuses for Other Primates Department 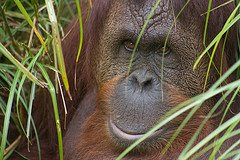 But in this case, I think maybe they've got a point...

A new study argues that there's a good reason that female orangutans steal food from males. They're testing to see whether they make good mates:

When males reacted violently or took the food back, the females screamed and tended to end the interactions much sooner than when the male tolerated the stealing...

"We think the stealing allows females to test males for their tendency to be aggressive toward them so they can determine whether they are worth further associating with."

Maybe stealing is wrong, but after all, there are two kinds of people in the world: the ones who will share what they've ordered at a restaurant and the ones who won't. And there's nothing more important to determine on a first date, right?

Email ThisBlogThis!Share to TwitterShare to FacebookShare to Pinterest
Labels: primate