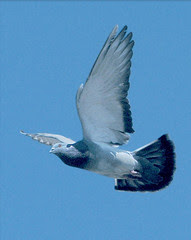 Street pigeons are considered by many to be no better than rats with wings. But carrier pigeons have a noble history of service to humans, including carrying messages in two world wars. Unfortunately - perhaps because work is scarce for them, with all the other communications technology we have now - it seems that these days they're not picky about who they associate with.

SAO PAULO (AFP) – To smuggle cellphones into prison, Brazilian inmates have turned to a much older form of communication: carrier pigeons.

Guards have intercepted two carrier pigeons carrying cellphones to detainees at a prison in Sorocaba, some 62 miles (100 kilometers) from Sao Paolo, a spokeswoman for the state penitentiary system told AFP.

"Penitentiary agents found the pigeons outside the Danilo Pinheiro prison but, fortunately, the birds did not have time to enter the prison building with the material," said Rosana Alberto.

Each pigeon was carrying a small bag containing a cellphone and charger, she said. They were caught in two successive days, last Wednesday and Thursday.

In fact it seems like pigeons are easily bribed to change sides in either direction. As reported by the AP:

Guards at the Danilio Pinheiro prison near the southeastern city of Sorocaba last week noticed a pigeon resting on an electric wire with a small cloth bag tied to one of its legs.

"The guards nabbed the bird after luring it down with some food and discovered components of a small cell phone inside the bag," police investigator Celso Soramiglio said Tuesday.