Dolphins and their dirty secrets 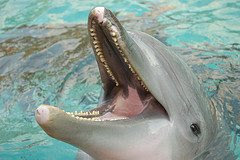 "Everybody who's done research in the field is tired of dolphin lovers who believe these creatures are floating hobbits," said well known animal trainer Karen Pryor, quoted in the New York Times - in 1992. She must be 17 years tireder now, because nothing has changed.

As we saw Friday, all dolphins have to do is show up and people assume they're doing some great good deed - despite the fact that when they can get close enough, they may actually attempt sexual assault.

Their own sex lives are no more gentle or romantic, the same Times article relates. In fact, male dolphins actually form gangs to capture females to have sex.

Males collude with their peers as a way of stealing fertile females from competing dolphin bands. And after they have succeeded in spiriting a female away, the males remain in their tight-knit group to assure the female stays in line, performing a series of feats that are at once spectacular and threatening. Two or three males will surround the female, leaping and bellyflopping, swiveling and somersaulting, all in perfect synchrony with one another. Should the female be so unimpressed by the choreography as to attempt to flee, the males will chase after her, bite her, slap her with their fins or slam into her with their bodies. The scientists call this effort to control females "herding," but they acknowledge that the word does not convey the aggressiveness of the act.

"Sometimes the female is obviously trying to escape, and the noises start to sound like they're hurting each other," said Dr. Rachel A. Smolker of the University of Michigan in Ann Arbor. "The hitting sounds really hard, and the female may end up with tooth-rake marks."

At the time of this article, one question was still unanswered:

although what happens once the males have herded in a female, and whether she goes for one or all of them, is not yet known: the researchers have yet to witness a dolphin copulation.

I guess I could look for more recent research on this, but aren't you appalled enough for now? If not, how about this:

...once she gives birth the alliance loses interest in her. Female dolphins raise their calves as single mothers for four to five years.

Dolphin laughing at us by Flickr user holga new orleans.