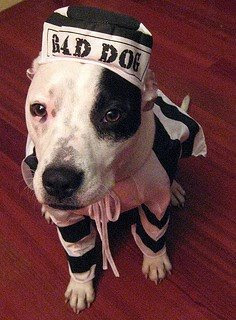 Keep an eye on that half-price Easter candy that you ran out and bought, or it could cost you more than you expected, like it did for the owners of a Lab in England.

A sweet-toothed dog that wolfed down 12 creme eggs in one sitting has sparked new warnings for owners to keep their Easter treats out of pets' reach.

Labrador Buster ended up in intensive care with chocolate poisoning after sniffing out the eggs at home in Derby.

Don't think experience will teach a pup anything in this department, as this lab showed after his expensive trip to the vet.

Owner Brenda Dawes said: "He's already tried to eat a bag of crisps and a toilet roll since he's been home."

(At least what he's eating is food, unlike his fellow Englishpup who who was reported in 2007 to have eaten 300 socks and 40 pairs of pants.)