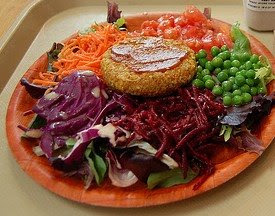 Amazing news from a study on bonobos indicates that not only are they just as fussy about their food as we are - but that the five-star scale for rating restaurants goes back much farther on the evolutionary scale than previously suspected:

Bonobos yell out their food ratings using at least five distinct vocalizations, the study found... When presented with their favorite foods, the bonobos almost always barked. They grunted when encountering their least favorites. The other calls seemed to signify ratings in between, with peep-yelps falling in the middle range for nibbles the individual thought were so-so.

It's no surprise though that dessert got higher ratings than the stuff that's good for you.

Zuberbuhler, a professor in the School of Psychology at the University of St. Andrews in Scotland, and colleague Zanna Clay began their experiments by documenting the food preferences of bonobos housed at the San Diego Zoo and the San Diego Wild Animal Park. The great apes were presented with foods on a tray, and the scientists noted their first choices.

Figs got a perfect score, with raisins a close second. In order from most to least favored, the rest of the list read: grapes, bananas, popcorn, apples, oranges, biscuits, celery, melon, lettuce, yams and peppers.

"It appears that energy-rich succulent fruits were the most favored of foods," Clay told Discovery News. "A bit like us, they weren't so keen on their vegetables."