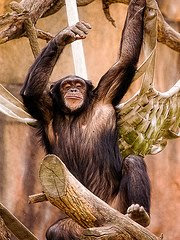 It's not news that certain primates pay for sex - not people, I mean, but we know about those macaques that are willing to give it up in exchange for a nice grooming.

So it's no surprise that our closer relatives do it too - but at least they have the sense to hold out for better pay. Male chimps pay with meat for mating, say researchers from the Max Planck Institute:

"What's amazing is that if a male shares with a particular female, he doubles the number of times he copulates with her, which is likely to increase the probability of fertilising that female."

As we've seen in the past, though, researchers find ways to make excuses for the relatives, arguing that this is less like prostitution and more like... marriage?

"We looked at chimps when they were not in oestrus, this means they don't have sexual swellings and aren't copulating."

...Professor Gurven, who was not involved in this study, added that the nature of this exchange of meat for sex is "kind of like pair bonding in humans, because it's long-term."