Dolphins are full of it 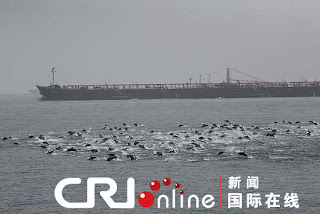 BEIJING, April 14 (Xinhuanet) -- Thousands of dolphins blocked the suspected Somali pirate ships when they were trying to attack Chinese merchant ships passing the Gulf of Aden, the China Radio International reported on Monday.

The Chinese merchant ships escorted by a China's fleet sailed on the Gulf of Aden when they met some suspected pirate ships. Thousands of dolphins suddenly leaped out of water between pirates and merchants when the pirate ships headed for the China's.

The suspected pirates ships stopped and then turned away. The pirates could only lament their littleness before the vast number of dolphins. The spectacular scene continued for a while.

I know, you're thinking, "But this is a good deed! How are these animals behaving badly?"

Well, there's nothing that ticks me off like animals leaping on a news story to get free publicity to boost their already ridiculous reputation.

There may be no animal that people have a more absurdly romantic view of than dolphins, and no doubt they like it that way. Showing up and leaping gracefully next to a pirate ship - and letting people's imagination fill in the most benevolent interpretation - it's a great way to deflect attention from their more unsavory activities.

In fact, dolphins not only harass female dolphins till they have sex with them (an activity worthy of attention on its own - come back Monday), they've even been reported trying to do the same to human swimmers, like the case of a dolphin called George reported in England in 2002.

O'Barry, who works with the World Society for the Protection of Animals, said: "Georges's well-documented sexual aggression poses a real threat to the thousands of swimmers who will be descending on Weymouth over the summer."

He told the London-based Times newspaper: "This dolphin does get very sexually aggressive. He has already attempted to mate with some divers.

"When dolphins get sexually excited, they try to isolate a swimmer, normally female. They do this by circling around the individual and gradually move them away from the beach, boat or crowd of people."

O'Barry said the dolphin would get very excited and rough before trying to mate with a swimmer, possibly causing them to drown.

We'll look more at dolphins and their aggressive attitude toward sex on Monday. In the meantime - They're animals, people, don't let the pretty paintings fool you!