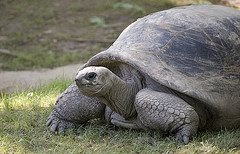 If you've ever spent even a moment observing tortoises at the zoo, you probably noticed that they seem to have nothing on their minds but sex. It's particularly conspicuous with the very large species - and not just visually, but also because they call attention to themselves by moaning and groaning at quite a volume.

Smaller tortoises are just as bad if less noticeable, though, and apparently some of them have unnatural inclinations, as you can see in this YouTube video of a tortoise's encounter with a shoe.

I thought about trying to embed this video but... I couldn't do it. I just felt too dirty. In any case, then you wouldn't see the many similarly disgusting entries that YouTube helpfully suggests under 'Related Videos.' Just don't say I didn't warn you.

And don't be fooled by the thoughtful expression on the face of the tortoise in that photo by Flickr user Misterqueue.