Dog pays for his crime 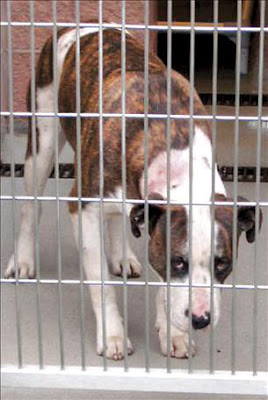 Some small amount of justice for a canine offender for a change: After two weeks in the slammer waiting for his date with the judge, Winston, who attacked a police car in Tennessee, has been sent to court-ordered obedience training.

If your dog chases cars and you wonder what he'd do if he caught one, take a look at the following video. Winston reportedly broke through two fences, and then persisted in attacking until he tore the bumper completely off, as recorded by the camera in another police car. Note how enthusiastically he seems to be enjoying the process.

Fortunately, the police don't mess around when you assault one of their own. Winston was called a "model prisoner" and his owner claimed he'd "been a model pet" up to the incident, but despite that - and despite his obvious attempts to use the adorable guilty look in the above photo - officials were not fooled into letting him off easy.

According to the Chattanooga Times,Winston will need to show that he has rehabilitated himself: they will drop the citation for Winston being a "potentially dangerous dog" after six months if he completes obedience training classes successfully and commits no further offenses.

Suspiciously, however, there's no word on what happened to Winston's partner in crime in that video. How did he get off so easy?